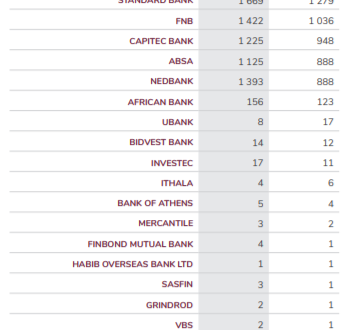 Online banking disputes have, for the first time, topped the category of complaints handled by the Ombudsman for Banking Services.

The Ombud’s 2017 annual report shows that 22% of complaints received related to online banking, of which cell phone banking fraud and phishing cases comprised 77%.

The country’s leading banks have in recent years made significant investments into enhancing their digital capabilities and into migrating clients to online channels, by way of lowering digital transaction fees. As previously reported by Moneyweb e-migration, based on figures disclosed in a number of banks’ financial results, is fast gaining traction. As such, the increase in issues related to online banking comes as no surprise.

ATM complaints, which topped the 2016 list, fell from 28% to 18% and came in as the second highest category of complaints. At 13%, credit card complaints came in third highest.

The Ombud also reported an unprecedented 35% increase in formal cases opened to 7 056. According to Reana Steyn of the Ombudsman for Banking Services, the increase in cases handled by her office reflects the complexity of complaints received by banks and their reliance on the Ombud’s office to resolve them.

In addition, the office reported a 26% increase in referrals or cases in which it helps consumers level complaints with banks to 7 173. The country’s five largest banks, which together service much of the retail banking population, continued to top the list of cases opened per bank.

The office closed 6 394 cases in 2017, of which 73% were in favour of the banks and 27% in favour of the complainant. “It is unfortunate that consumers who are unsuccessful with their complaints levy the criticism of bias against the Ombud’s office. Our office works very hard to uphold high standards in adjudication and in applying the law to the fact of the case,” Steyn said, adding that the role of the office is to resolve complaints in a fair, independent and timeous manner.

“We want to be known as a reliable, trustworthy and honest organisation committed to the effective resolution of disputes in the banking industry, no matter how small,” she said.

On average, cases were closed in 34 business days with 99% of cases being closed within four months.